I don’t know if many people have made major life decisions based on rainbows, but whoever these people are, I am glad to be among them. 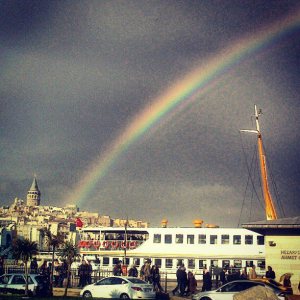 Rainbows had already been an important part of my life, in some sense, on the day I saw the broadest and brightest rainbow of my life. It was the morning of November 22, 2012, and I had just arrived in Istanbul. I thought I was on my way to India. Little did I know then that the power of light would reach inside of me and send me home.

I had spent the night on the floor of a gas station just across the Bulgarian/Turkish border. The trucker who had taken me that far ended up blowing by me on the other side of the border. I had walked across alone beneath a blanket of stars, enjoying the clean, crisp air. Life was smiling on me. I slipped through the border swiftly, effortlessly, and when I watched ‘my’ truck breeze by an hour or so later, I smiled back. My peace couldn’t be shaken. I pulled out my guitar, made some friends (who fed me), and then I slept. I caught an easy series of rides the next morning and found myself suddenly wrapped up in the old arms of a rugged and restless city. But what beauty and charm lay hidden within it. I was truly moved. The rainbow which welcomed me to the centre of the world – the bridge between Europe and Asia – whispered itself in rock-solid silence, shaking me to the core.

I feel I captured the general sentiment fairly well as I touched upon it in my first letter following my great adventure:

My journey brought me home in a hurry. I didn’t see it coming. I was bound for India, where I had planned to find the answers. I only made it as far as Istanbul – where East meets West – the curves of the murky, Turkish strait connecting continents, bridging worlds. A great rainbow embraced me upon arrival and tears welled in my eyes. I had hitch-hiked through the cold, harsh Bulgarian night, sleeping in a gas station just over the border, where I played a few tunes for some food. I rose early – if not rested, at least at peace – and thumbed a couple of trucks into the massive metropolis. As the soft but sturdy light of this broad, benevolent rainbow reached into me, I felt a change. In that moment, I knew something I could not yet see. My perspective was fuzzy, and yet, through and through, I knew. Something. Even now, it grows in clarity, gently, its pace dictated from beyond. The very nature of light is such that this rainbow, every rainbow, and indeed every shard of light passing through our lives, is at once entirely personal and universal. We are the bridge. That rainbow spoke to my heart, and I know it had the same power to speak to the twenty million other souls moving about the city on that day.

I spent the week reeling. I was trying to make sense of what had happened. I almost couldn’t believe it. It all fit so perfectly. This rainbow was a culmination. It was a major turning point in my journey and in my life. I could not have scripted it better myself. I had been on the road for nearly two years, living and writing a book about traveling light, and suddenly I was stopped dead in my tracks by just that – traveling light. The dense and gentle rainbow brought about a subtle inner shift, and I was only shown bit by bit its true impact. On some level, I am still coming to terms with its implications, carrying on in complete faith and gratitude.

I met up with local friends that night and found even more signs confirming the ‘centre’ I had just stumbled upon. As the week went on dominoes continued falling and affirming this new-found balance. It popped up everywhere. I was baffled. Tears of laughter stripped me of all my former certainties. I found myself stunned, thoroughly humbled by wonder. Before the week was out, after busking for an hour or more on a broad pedestrian walkway, unfolding my soul, I discovered that this ‘dynamic centre’ had always been my home. I had never been anywhere else. There was nowhere else. I packed up my guitar and suddenly saw myself in every set of eyes passing by.  Not James, but my deepest, truest self, far beyond any individual identity. I laughed at myself. It was all so obvious, and so abrupt. I already knew it.

Everywhere is the centre. There is no edge.

But that’s all I am going to say about it for now. 🙂 I will follow up next week. After a couple of longer blog entries, I feel a shorter one will do for today. Perhaps this post is just a tease. Maybe I want it to mirror life in its reluctance to satisfy expectations, to deliver the juice. (ps…it’s not on its way, it’s already here…)  Maybe I am trying to see if I can drum up interest for next week, a patient page-turner. Maybe I am just done writing for the day and want to go watch a movie. 😉

Who knows? But I hope you won’t let the mystery stop you from stepping out into it. That’s ultimately what the rainbow has been teaching me. Maybe.

More on rainbows next week, right here on Traveling Light. 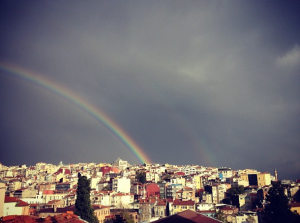